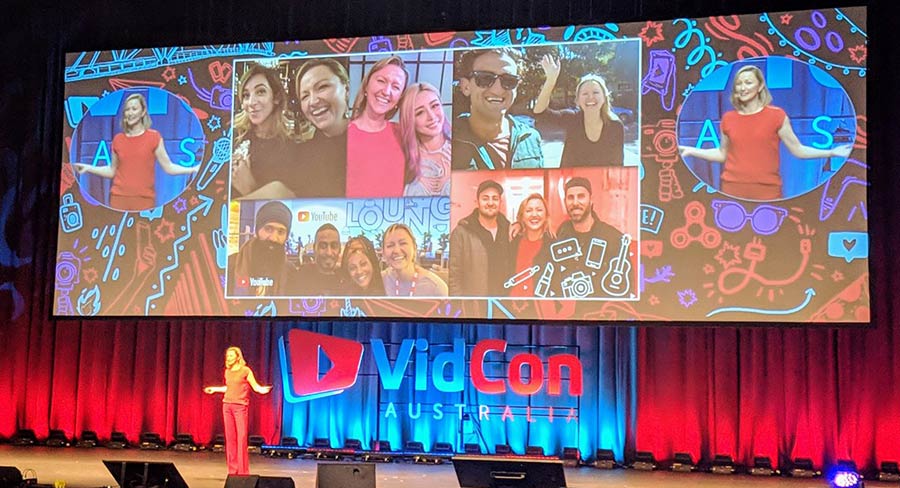 • 89 YouTube creators in Australia that have more than 1m subscribers

At the recent VidCon 2018 three-day event in Melbourne, Google and Facebook both invested considerable amounts to set up displays for both the consumers and the industry attending the event.

As VidCon is all about online video, Facebook’s photo-sharing platform was making a noise about the new Instagram product IGTV in the Instagram Lounge.

Meanwhile across the hallway, Google’s video platform was hosting guests in the YouTube Lounge.

Several levels of security were strictly monitoring access to either lounge.

Both tech giants presented various sessions. One of the more entertaining was YouTube executive Jon Youshaei with a presentation titled Beyonce’s Surprising Secret to Creativity. Hosting guests to the YouTube Lounge was the director of marketing for Google Australia, Aisling Finch.

“VidCon is very important for us – it is where the whole community comes to life,” Finch told Mediaweek. “It covers the fans and consumers, but also the creative and the advertisers. It is wonderful to bring them all together and we are delighted VidCon has returned for a second year.

“For YouTube we like to hero the creators who are at the heart of the platform. For advertisers it is important to show them that ecosystem and how creators and consumers are engaging.

“It is also important to show advertisers who are effectively using the platform for their business results.”

Finch told Mediaweek YouTube gets behind creatives to ensure as many people as possible have the opportunity by democratising content creation to get the most out of the platform, to engage with audiences and to monetise that content.

After years where mobile was a big source of growth, and still is, for YouTube, Finch noted TV is now the fastest-growing platform for YouTube. “We are seeing changing behaviours even on a more established platform as ours. We need to keep advertisers abreast of that changing content consumption and what that means for how they engage with their brands.”

Finch added that Aussie consumers are very engaged with YouTube. “For adults 10+ there are 15.7m users engaging with the platform every month. What is maybe even more impressive is the amount of watch time.

“They are spending on average 22 hours 29 minutes a month.

“We are very proud that Australian creatives punch above their weight. There are 89 YouTube creators in Australia that have more than 1m subscribers and that is the highest per capita in the world. It is wonderful to be able to meet with them at VidCon and celebrate the community.” Education is one of the online video categories where Australians do well. And any discussion about Australians with big YouTube followings can’t avoid acknowledging the achievements of Wengie with over 12m subscribers.

“I had the opportunity to meet her at VidCon last year and she has amazing videos from life hacks to beauty tips,” said Finch. “She is Chinese-Australian and her parents moved here when she was young. Now she is the top Australian YouTube creator. She has really taken advantage of the platform and grown her audience and her fan base. She was an accountant before she took to YouTube!”

While 15.7m consumers means YouTube must reach a broad Australian audience, Finch noted is does over-index to younger users.

“Younger users are watching for 34 hours, 47 minutes, which is the same as watching three seasons of House Of Cards in a month.

Some traditional publishers and content creators also use YouTube as a way of showcasing their content. “Some more than others. Some leverage the platform really well. Rising tides float all boats – we are seeing total video consumption increasing. The different channels can feed off each other.”

Without specifying amounts, Finch said there is an increased marketing spend being invested in online video channels. “We are seeing advertisers lean into the YouTube platform to engage directly with creators and doing collaborations.”

Finch said one of the big myths about content consumption was that attention spans are shrinking quickly.

“There are more formats and there are snackable formats, but it is also true that when advertisers create really compelling content, for example maybe a five-minute ad, people will seek it out if it is great content.”

Finch: “It is an appealing proposition to many for the music primarily, but also for an ad-free YouTube experience and for the original content. From a music point of view it is pretty exciting. It is the largest music library in the world. You not only have the original versions of music but different versions, live versions, a real depth and breadth of music content.”

There are two tiers of subscription for YouTube Premium – $11.99 and $14.99. A user can just choose music or take the whole package.