In a series of introductions for World Movies during a week-long season of ozploitation classics, Mercado will appear as Australia’s greatest ‘Unknown Stuntman’.

Mercado told Mediaweek that “The creative team there came up with this concept that I would play a character called ‘The Unknown Stuntman’. I don’t know whether to laugh or cry because they made me look so hilariously hideous. A wig, sideburns, moustache. They dressed me in clothes and asked me to stick my gut out. I play an old 70’s guy who has been in every film, but he’s off in the corner.”

The season of movies runs daily between 9 July and 16 July, with additional Saturday marathons from 4pm. A full schedule of the films on offer are listed below.

In addition to discussing the World Movies event, the panel go on to discuss some of their own favourite ozploitation films, along with a broader look at the big TV-related stories of the past week.

Razorback (1984, Australia)
Monday, 4 July, 9.30pm
A vicious wild boar terrorizes the Australian outback. The first victim is a small child who is killed.

The child’s granddad is brought to trial for killing the child but acquitted. The next victim is an American TV-journalist. Her husband Carl gets there and starts to search for the truth. The local inhabitants won’t really help him, but he is joined by a hunter and a female farmer to find the beast.

The Man From Hong Kong (1975, Australia)
Tuesday, 5 July, 9.30pm
Hong Kong Inspector Fang Sing Leng travels to Australia to extradite a drug dealer. When the hood is assassinated on his way to court, everyone suspects Jack Wilton, a crime lord who the local police haven’t been able to pick up.

The Adventures of Barry McKenzie (1972, Australia)
Wednesday, 6 July, 9.30pm
Young Australian, Barry McKenzie, travels to England with his Aunt Edna after his father dies and a request is revealed in his will.

Long Weekend (1978, Australia)
Thursday, 7 July, 9.30pm
When a suburban couple go camping for the weekend at a remote beach, they discover that nature isn’t in an accommodating mood.

Alvin Purple (1973, Australia)
Friday, 8 July, 9.30pm
This hilarious and controversial sex-romp follows Alvin, an ordinary Australian guy who works in a waterbed store. Remarkably, he is always pursued by over-sexed women, which constantly gets him into hot water.

You will never be the same after you discover the secrets of the Inn of the Damned! On a lonely stretch of road, deep in an isolated Australian rain forest, lies an eerie, forgotten Inn. Few travellers stop there now, and those that do…disappear! An American bounty hunter is hired to unravel the Inn’s chilling secrets. He is soon confronted by its demented owners, obsessed with guarding the terrible truth within. Action packed with sadistic violence, bare flesh and tainted sex, Inn of the Damned is a horror classic that will shock you to the core!

The ABC’s of Love and Sex (1978, Australia)
Tuesday, 12 July, 9.30pm
A tongue-in-cheek sex education documentary covering a different subject for each letter of the alphabet, e.g. A is for Anatomy, B is for Babies, etc.

Fat middle aged 24/7 drunkard Les Patterson (Barry Humphries) represents Australia at the UN where his fart literally incinerates an Arab ambassador. Patterson is reassigned to the Middle East so he can be tortured to death by the country he insulted. Patterson’s arrival disrupts a coup and he is spared. At a bar Patterson meets a bioweapons scientist who’s developed a horrific disease for the KGB which plan to distribute it to the Pentagon via toilet seats. Patterson, though far too drunk to understand anything happening, teams up with Dame Edna (also Humphries) to save the world.

Felicity (1978, Australia)
Thursday, 14 July, 9.30pm
Young Felicity lives in a monastic school. The only way to live out her sexual fantasies is together with her girlfriend Jenny. But then she receives an invitation to visit her sister in Hong-Kong and can’t wait to finally do the real thing. 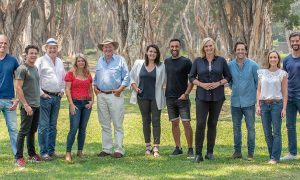 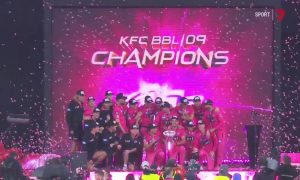