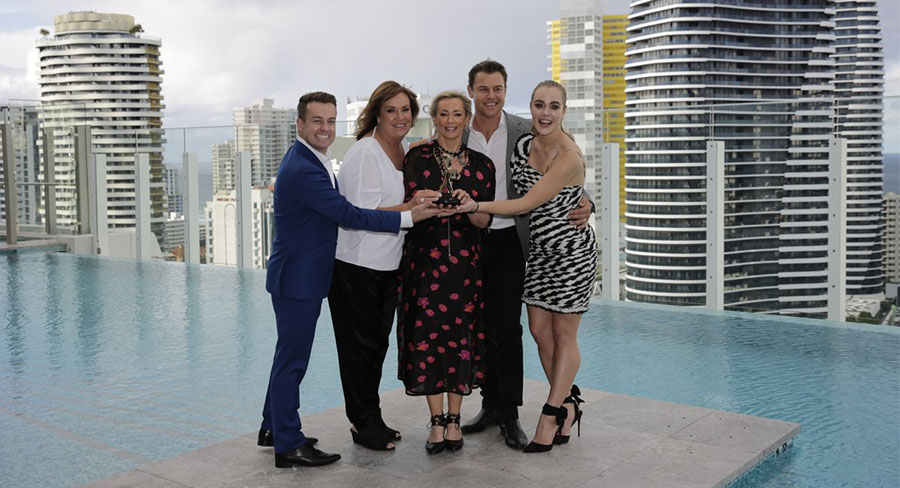 Any doubts that the TV Week Logie Awards might have trouble luring stars to its new home on the Gold Coast were blown out of the surf yesterday when five of the six Gold Logie nominees travelled to the Goldie for the announcement ceremony. Ironically the only person missing was Gold Coast local Andrew Winter, who was unwell and unable to attend.

TV Week editor Thomas Woodgate said there were many surprised that both Amanda Keller and Andrew Winter were nominated. “There were less people surprised to see Tracy Grimshaw nominated, given her support from Nine colleagues,” Woodgate told Mediaweek shortly after the nominees were revealed.

“Amanda, Andrew and Tracy have not been nominated before and when you add them to Rodger Corser, Grant Denyer and Jessica Marais it is a very strong list and I am very happy with it.”

“But with live voting in the week before the awards we are not able to know who is going to win Gold this year. In previous years we have always known. It’s going to be a hard decision for people to choose between one of those six.” TV Week knows how many votes each nominee got and Woodgate revealed it was very close. “I would love to tell you there is a frontrunner but there isn’t, which is the truth. I could not pick the winner from the nominees.”

Live voting will mean there will be massive campaigns from all the networks come June 25 when voting for nominees in the 10 Most Popular categories opens for one week. “This is a great way to reinvigorate the Logies this year. We will see campaigns from the various broadcasters like we have never seen before.”

The pages of TV Week could look a little different from now on after this voting. “TV Week readers have spoken and they are telling us who are the most popular people on television and we have rethink how we cover these six Gold Logie nominees. Andrew Winter and Tracy Grimshaw have not had covers of TV Week and we will be taking notice of what the readers want.”

Actor Roger Corser is what Woodgate called “a darling of the Logies” as he is again nominated for Gold and he is the only actor, male or female, to make both the Most Popular and Most Outstanding nominee lists.

One of the surprise nominees in the Most Popular Reality Program category is Nine’s Travel Guides that rated well and struck a chord with audiences in its slot later in the night. All the other nominees in this category are big budget 7.30pm reality series running across multiple nights of the week. “Travel Guides also managed to beat both The Bachelor and The Bachelorette in this category,” said Woodgate.

While Foxtel has managed to crash the FTA awards party again – this year with 17 nominations – Woodgate also made mention of Stan which has also made a mark with nominations for Romper Stomper and Wolf Creek.

“They have cleaned up in the Outstanding categories with nominations for actor, actress and mini-series. Stan is becoming a major player on the television landscape.”

Woodgate said the Gold Coast is right behind the first year of the awards in Queensland. “If today’s nomination event was any indication of how Awards night on July 1 will go it will be a great night.”