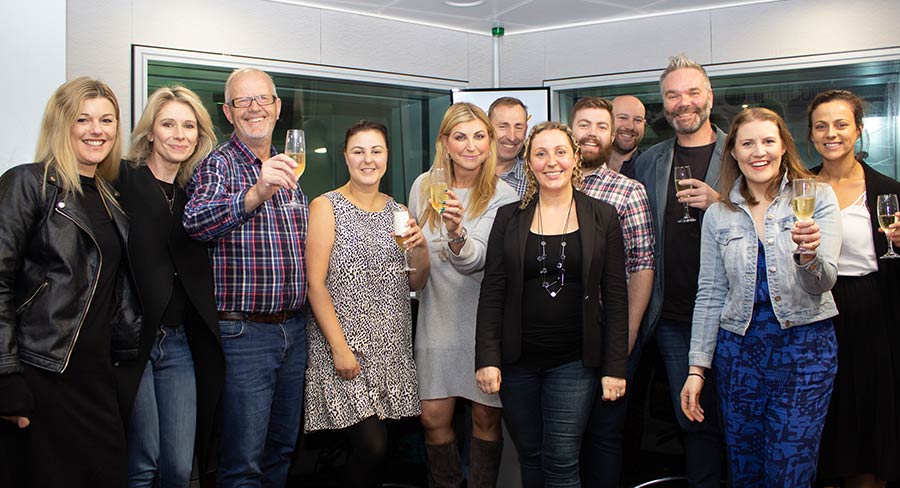 Understandably there were two at the centre of attention yesterday. In the short history of the smoothfm brand there have been a number of milestone days – and yesterday was one of its biggest. The Sydney and Melbourne stations are again #1 FM which is massive in itself, but added to that was the Melbourne breakfast show hosted by Mike Perso and Jennifer Hansen is #1 FM breakfast show for the first time. That honour coincides with Perso celebrating 40 years in radio in 2019.

Such was the size of the victory yesterday, that both Jackson and smoothfm program director Georgie Page were in Melbourne yesterday. Page celebrated on station with the team after the results came in, then Jackson appeared later in the day as a surprise guest after deciding to hop on a plane after breakfast went #1.

There are a few sore heads around the station this morning following a celebration at Hellenic Republic.

Jackson noted that both breakfast shows have made it in the competitive world of FM breakfast radio without the huge marketing spend that is unleashed by broadcasters on their breakfast shows. “They haven’t even had a billboard,” said Jackson.

Melbourne’s Tullamarine Freeway and other roadways around the city are often filled with billboards promoting various FM radio stars.

So have they earned a billboard now: “Well if we give them a billboard they might go backwards. They have done very well so far by letting people find the breakfast shows.”

The smoothfm success might even trigger a marketing spend review by some and the impact outdoor is having. “There could be a few conversations around that,” agreed Jackson. The Nova Entertainment focus for its smooth brand is to continue to deliver more of the same. “We will also continue to evolve the station which has obviously changed over the years in line with the audience. We want to continue to grow. We have cumes in Sydney and Melbourne that are nearly at a million and it would be lovely to crack a million.”

smoothfm’s Melbourne cume audience is sitting on 996,000 for a second consecutive survey, while in Sydney the cume is close too on 968,000.

“What the size of that audience means is we have such a broad church of listeners we are keeping different types of people happy. Everyone is coming to smooth these days. We want to continue to keep all ages engaged and be as broad as we possibly can.

“We will keep true to our more music less talk promise, but also make people feel relaxed and better about their day. We are very clear about the brand and its essence.

As to the impact the smooth success is having on the market, Jackson is only half joking when he says, “They are all coming after us.”

“Other people are playing more of the older music. We are in a different music cycle with not as many powerful new pop songs. Everyone is reviewing their musical offerings.”

He noted that smooth is doing well to hold off attacks from stations like Gold in Melbourne and 2Day in Sydney and that is “something to be proud of”.