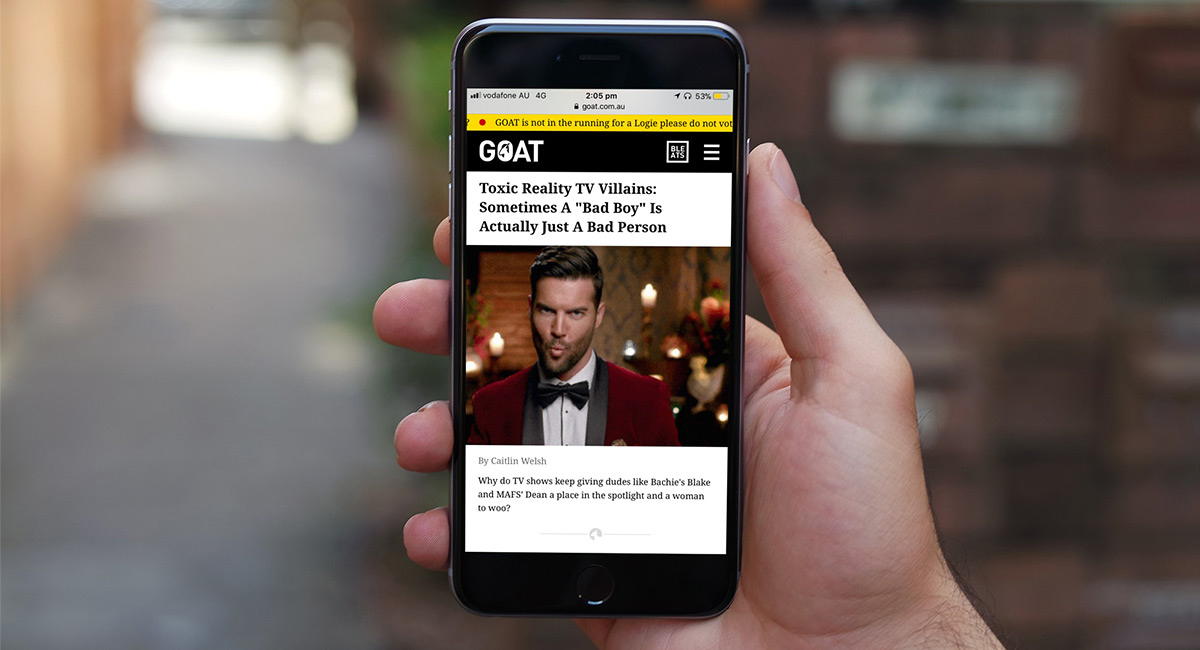 The GOAT editorial team is led by Giles Hardie, a former Fairfax reporter and ABC broadcaster.

Digital commercial director Kane Reiken has been with Nova Entertainment for exactly one year, and on his first day at work he started working on GOAT. “It has been my focus for a whole year and it has been very exciting to pull the covers off as we launch.”

Just over a week after launch, GOAT has revealed its key editorial team members after a wide search.

Reiken told Mediaweek, “We wanted people who can really connect across a wide range of topics. What is really great about our tone of voice and the editorial philosophy we are building is that we are open to working with a wide range of contributors.” Goat.com.au has launched ad-free. “For a new mobile platform the audience comes first and we have thought about the user experience,” said Reiken. “We don’t want banner ads that don’t engage the millennial audience. Goat.com.au is a platform for engagement and a platform for attention.”

He also flagged Nova Entertainment will soon have an announcement about launch partners.

Reiken said the launch is about Nova going after an evolving audience and is part of the digital strategy. Nova hasn’t ruled out using acquisition to build the audience.

Any partners of GOAT will be integrated into the content with Reiken explaining that means multimedia content – written, audio, video and visual images via memes or cartoons.

“When it comes to commercial messages, we are talking about less is more – messages that will have a higher impact. We have one format we are calling a pop-up channel, which sits in the navigation bar and allows a great experience of rich media for consumers.”

He said what they do with partners will be very different from what is available in market right now.

If Goat.com.au is successful, could there be further mobile platform launches using a similar model? “One hundred percent,” said Reiken. “We are having many discussions with other businesses and other concepts that are complementary to our current offering as a business. This is just one of our ambitions.

“I have complete confidence in it succeeding because of the research and working with our agency partners building a product that is market fit. If we can take our learning and build them into additional products in a multimedia entertainment business, we will.”

Why is it called GOAT?

Reiken: “When you go through the process of putting names on a whiteboard, some of them stick and some don’t. We did a three-part research study to identify the habits of our audience, internet consumption behaviours and the trends. That research helped us narrow a final list of eight and we put them through a testing phase and GOAT rated very strongly.

“People think it means Greatest Of All Time, but it doesn’t really mean that. It just means goat, as an animal, as a thing. It lives and breathes and it can mean anything to anyone. Goats run the internet, which is quite useful.” (ABC News reported mid-2017 goats have become hugely popular online, inspiring goat yoga, mashup videos and Instagram accounts boasting hundreds of thousands of followers.)

It is one thing deciding on a cool four-letter word, but securing the URL can often be difficult.

“That is always the hard bit. I was in discussion with the owner of the Goat domain. He was actually in Antarctica at the time. Luckily we were able to negotiate a deal.”