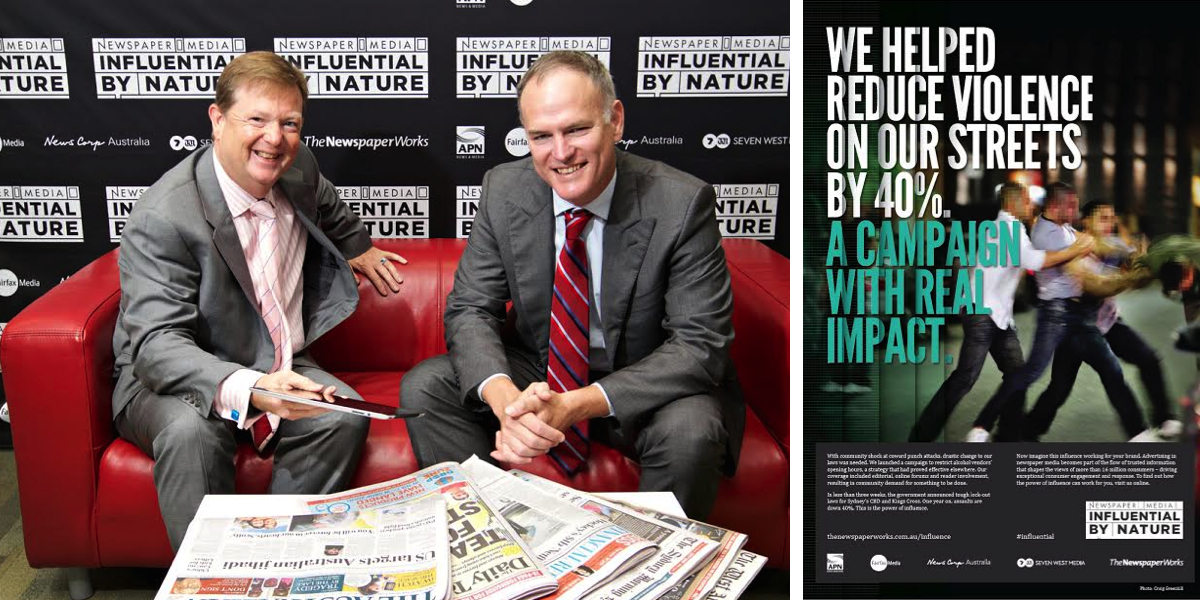 Australia’s four largest newspaper publishers team up to launch a brand campaign to demonstrate the influence of newspaper media and restate to advertisers why newspapers get results.

Australia’s four largest newspaper publishers have come together to launch an industry wide positioning and brand campaign that demonstrates the influence of newspaper media and re-states to advertisers why newspapers get results.

The new positioning for newspaper media is – “Influential by Nature”.

A print and digital campaign will launch the new positioning and features a series of powerful, real examples of influence that have achieved tangible outcomes for both the community and for advertisers. The first execution, launching Monday April 13, demonstrates how a compelling and consistent newspaper media campaign aimed at reducing the incidence of alcohol-fuelled violence on Sydney’s streets resulted in a 40% reduction in violent assaults.

In coming weeks, The Newspaper Works will unveil a series of ads featuring examples of newspaper media’s influence from across the country and how advertisers benefit from this influence with successful campaigns.

The Newspaper Works Chairman and CEO of APN News & Media, Michael Miller (left), said: “Every effective and meaningful campaign needs influencers to drive trust, belief and action. Influence is an inherent characteristic of newspapers and we need to remind advertisers of the impact newspaper media brands still have today among consumers.

“This market positioning, which has the support of all four of Australia’s major publishers, re-states the natural commercial and consumer benefit of newspaper media and its importance for effective communication.”

The Newspaper Works CEO, Mark Hollands (right), said: “This has been a real collaboration between the major publishers. We began with the premise of creating a message that was true for all newspapers in metropolitan and regional areas. The enthusiasm we have had from publishers and editors across the spectrum of newspapers in Australia has resulted in this campaign.

“Newspapers have been influential since their inception. History shows that great mastheads have opinions and are unafraid to share them. Today, in the age of digital communication and media fragmentation, newspapers have maintained and grown their influence in our society.”

The campaign, created by The Hallway, will appear in print and digital editions of newspapers and marketing trade media.