75% of Australians read a newspaper in August 2016

News media continues to appeal to Australians with 16.8 million people, or 92%, reading news media in print or on digital devices in August.

According to the latest emma data, consumption of news media on digital devices continued to strengthen with 13.3m Australians, 73%, accessing news, information and entertainment content on smartphones, tablets, PCs and laptops.

In the 12 months to August 2016, The Sydney Morning Herald had the highest cross-platform reach of 6.33m readers across web, mobile and newspaper. News Corp’s The Daily Telegraph and the Herald Sun followed, reaching 4.47m and 4.22m readers, respectively.

“The fact that people choose various platforms to consume news media shows that it remains an integral part of their lives and lifestyles and demonstrates why news media is an powerful medium for advertisers to connect with our audiences,” he said.

“Three in five readers, or 60%, say they get news from both digital and print sources, well ahead of the number of readers who rely solely on print, at 21%, or digital, at 19%.

“The news media sector continues to be strong, stable and resilient across all platforms. Our industry dominates the national agenda with its influential journalism and large and engaged audiences.” 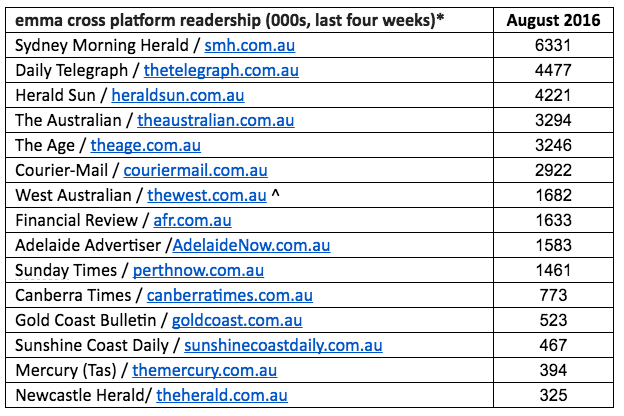 Network 10 launches Shake: Show me the content, dawn to midnight