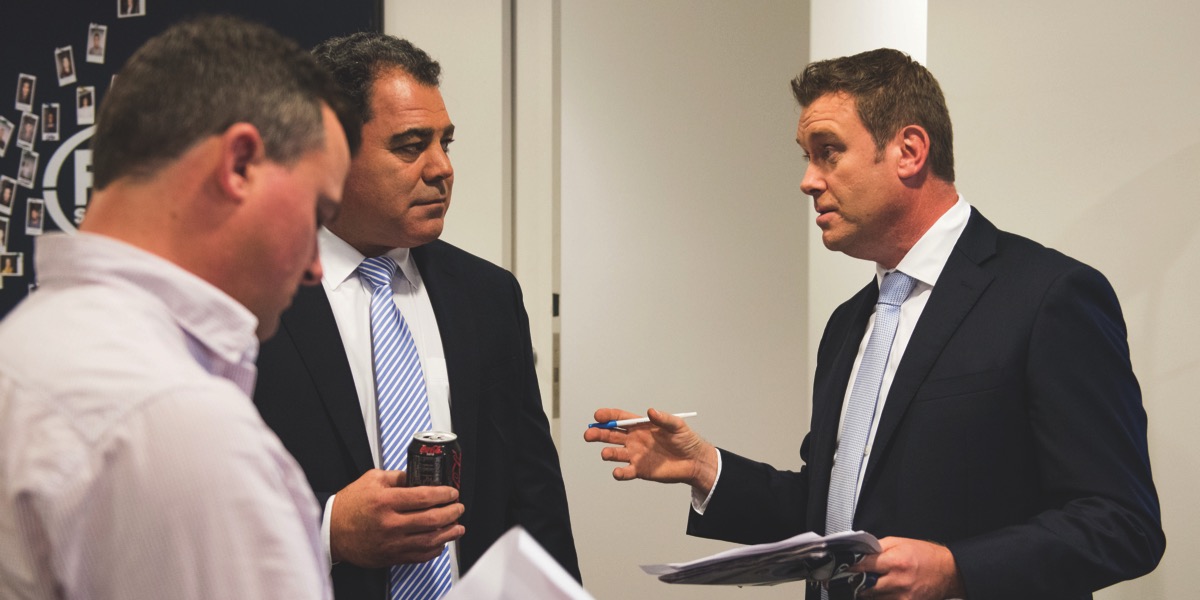 The former Nine Network sports reporter and commentator Andrew Voss has never been busier. After departing Nine in 2013, Voss is now a key ingredient in Fox Sports’ live coverage of every NRL game. The demands on his time might even grow next year when Fox Sports launches its dedicated NRL channel, much the same way the broadcaster operates Fox Footy to cover AFL.

“I’m living and breathing it,” Voss joked to Mediaweek about his 2016 media schedule. “I have been covering rugby league for 30 years now in the media and I have never covered more matches through the first couple of months of a season…but how good is it?

He makes sure he is watching the game on Monday nights. “There are probably some people out there who think five days of rugby league is too much. I am thinking, gee I wish we had something on Tuesday and Wednesday night as well!” [Laughs]

As to reasons why the Fox Sports NRL ratings have jumped so much this year, Voss said: “The viewers didn’t know what to expect when it got to round one this year. Back then it hadn’t quite hit home how big the coverage is. To have every game live plus the supporting programs around them is huge. In some ways you can now say rugby league is getting the coverage it has always deserved.

“It is only going to get bigger next year on Fox Sports. It is a very exciting time to be part of the game.”

Voss still manages to log some hours on air at 2UE too with the sports reports across the breakfast show hosted by John Stanley and Garry Linnell and he also fills in hosting the whole breakfast show when they take ratings breaks.

“I have been very lucky that in my career I have established many relationships with people not just in Australia but also New Zealand where I do some work, also in England and Papua New Guinea too. Wherever rugby league is played I like to spread the gospel.”

Voss told us that he had worked out in round eight of the NRL this season he managed to do 17 interviews and six columns before he did his work for Fox Sports. “I’m talking, writing, eating and sleeping rugby league…and loving it.” His work in New Zealand includes some columns and also some radio work. “They like their stories based around the Warriors and this year was very lean for them to start with.” Voss also previously called games for Sky Sport in New Zealand.

“I have always likened the rugby league fan base in New Zealand to the French resistance. Because rugby union is so all-encompassing across New Zealand, there is a passionate band of fans for rugby league and they are so desperate for the Warriors to do well. Sadly so far the Warriors haven’t lived up to their potential. However, in the Test arena it has been a golden age for New Zealand rugby league.”

Voss worked for Premier Sports in the UK covering the Rugby League World Cup. “As a result of that Premier Sports are keen to have me back for the Four Nations this year.” Voss has also been a regular columnist for League Weekly in the UK. “In England there are two publications who incredibly deliver news about the sport for 52 weeks of the year.”

It was perhaps unfair to ask a question we know he’d have trouble answering – which of all his work does he look forward to most. “I am just a footy fan. Over a lot of years I am proud of everything I have achieved and I have worked hard for it and I don’t mind blowing my own trumpet in that regard. I pinch myself every night I turn up at Fox Sports and work with legends like Greg Alexander, Gorden Tallis, Matty Johns, Nathan Hindmarsh and I think how good is this. This is my living. I would do it just for a hobby. I feel very blessed.

“If you want to cover rugby league, Fox Sports is the best place to work.”

The 2UE breakfast show he contributes to and sometimes hosts starts at 5am every day, something that Voss notes means he does “crazy” hours on some days of the week. “I like to challenge myself and do more than just rugby league. But if all I was left with was rugby league then I wouldn’t be disappointed.”

About his time at Nine, Voss has many fond memories of his years there. “In my first seven years in the media I worked at 2UE and thought it can’t get any better than that. I then got an opportunity to work at Nine for Gary Burns [now at Fox Sports]. I never dreamed of being on television, but I went over there and had a ball for 18 years. Now at Fox Sports I am having the best time covering all these matches.” Voss makes sure he is prepared for all games he covers. But you have the feeling he enjoys that time too.

“I have always believed in the saying – ‘He who fails to prepare, prepares to fail’.

“The work is the preparation. We have a great support staff at Fox Sports with all the stats, and I also do my own notes. I do all handwritten notes and write them in a book which becomes the Voss Bible. Whether it is a Test match, a first grade final or a schoolboy rugby league match I treat them with the same respect.

“When I get to a game I may only use 20% of the notes I have done, but it is all there. I have never gone into a game not prepared thoroughly.”

Voss stressed that is the way he does things, not the way it should be done by others.

So fastidious is Voss about his note taking, he added: “My only regret about my career is that when it all started out that I didn’t write down a little diary entry of every game that I did.”

At the very least he wishes he had carefully tracked every ground he has been too from the start. “I have been to more rugby league grounds than any commentator. I have called games at Jacksonville in America, in Suva, into the south of France and across to Ireland. I’ve been to all the country venues up to North Queensland. If I’d kept notes about them all it would have jogged the memory – a few brain cells are starting to wither!”

Fox Sports’ NRL ratings have grown on average close to 12% year-on-year so far in 2016. Nine’s audience has dropped a little, but the FTA broadcaster stressed to Mediaweek Nine factored in that change and the revenue Fox Sports pays for the extra live games compensates for the audience loss.