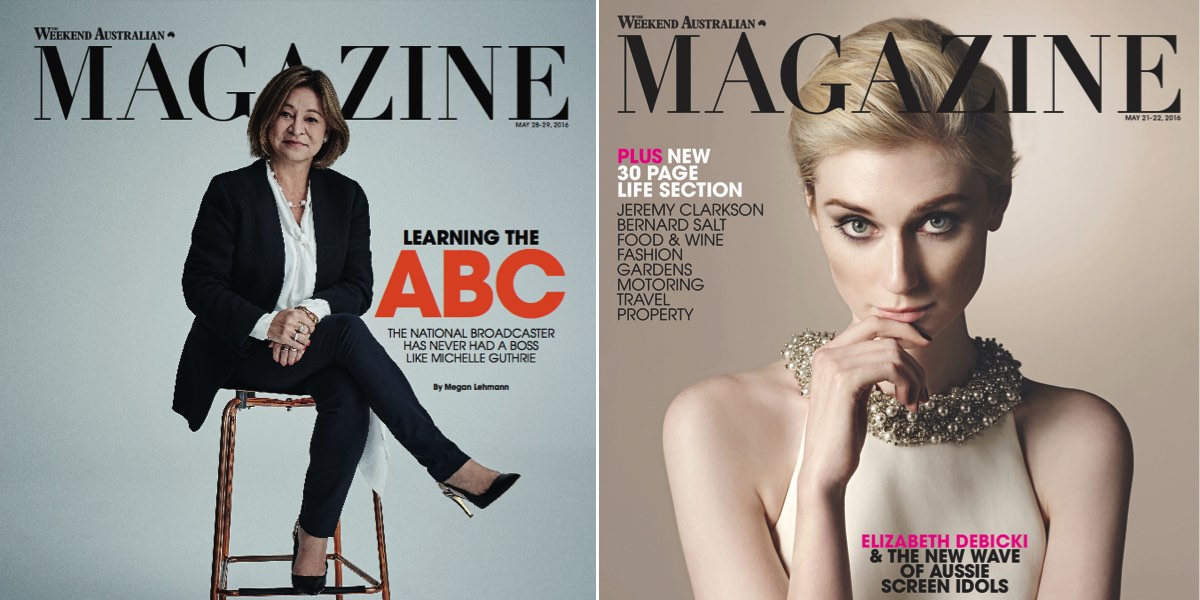 When it comes to deciding on redesigns, the team at The Weekend Australia Magazine has moved relatively quickly. Editor Christine Middap told Mediaweek the plans behind the redesign unveiled last week started in February this year.

“We were looking at the weekend paper and the Life section. It is a fantastic section and it lived on newsprint in the paper. We also had lifestyle content in the newspaper and we were talking about how that content was living in two places.

“It occurred to me if we combined all the lifestyle content into the magazine it would mean a thicker magazine and a great offering both for readers and for advertisers.”

Middap said that after costing the changes, the publishers gave the OK for the reinvestment needed to make it happen.

Coinciding with the merged content is a redesign which includes a new masthead. “It’s good to look at the masthead about every five years – it’s something you don’t want to do too often.

“We also have thicker cover stock. We have been averaging about 40 pages an edition for the last couple of years. Our first new-look edition is 68 pages and the second will be 60 pages. The editions should run between 60 and 68 pages from now on.

“There is also a redesign inside and we have added the Life section at the back of the book.”

Among the columnists moving over from the newspaper to the magazine are Bernard Salt and Jeremy Clarkson with Glynis Traill-Nash doing an extra fashion page, plus Helen Young the gardening writer.

Retaining their places in the magazine are Phillip Adams and Nikki Gemmel.

Readers need not be worried that there will be less of restaurant reviewer John Lethlean who used to feature in both the magazine and the newspaper on Saturdays. “There will still be two columns from him every week. We needed to make sure that what we kept was what we knew readers really loved. John’s weekly column has moved into the magazine opposite David Herbert, and we now have a guest chef too, meaning there are two lots of recipes.” The first guest chef was Maha’s Shane Delia.

“We have expanded our Home Hunt page giving us some more real estate and we have introduced a travel page which looks at great domestic travel destinations.

“That makes up a 30-page Life section…which is a lot!” Middap said the team asked themselves what people did on a weekend and then made sure they had it all covered.

When asked if the prestige property pages in The Australian mean the cheaper properties that used to crop up on Home Hunt will disappear, Midapp said: “There is a spread on a high-end property, but Home Hunt remains the same and I can tell you that you will find a property in Queenstown, Tasmania for around $120,000.” There was also a property in Woollahra under $1m while at the other end of the scale homes were offered for $4m or more in Indooroopilly, Mosman Park and Lorne.

The editor explained the core offering of the magazine wouldn’t alter with the arrival of the Life section. “Our stable of writers will continue to deliver profiles and news pieces.”

When asked about the ads promoting the new magazine as “surprisingly confronting” and “refreshingly honest”, Middap said: “We have always done those sorts of features and columns. Nikki Gemmell’s column is always pretty unflinching. We have not given her, or Phillip Adams, any new writing instructions. The features will continue to be the grist of the magazine and the number of awards we win indicate we are right on the money. Although we have a Hollywood profile on the cover this week, that is not to say we won’t feature a confronting crime story next time.”

Coping with all the new content has posed some challenges. “We continue to be a lean little production team,” said Middap. “Like everyone in media we are getting more out of the people here. To allow for that we have stopped doing things that weren’t essential so our staff can be focused on the new magazine. Last week was a test case to see how it could run and it went all right. As long as we deliver good copy and good pictures to the production team it goes pretty smoothly.”

Middap conceded it is more difficult to judge the success of inserted magazines because they are not sold separately at retail. “We go off the host circulation of the newspaper and happily that circulation has been very strong for The Weekend Australian.

“One of the things we are very aware of is that the magazine is one of the biggest drivers for purchase of the Saturday paper. When people buy that edition they really want the magazine. It is therefore important we don’t change it too much and keep our core promise to readers.

“Advertising in this environment is critical. We really have to make sure we can attract as much as possible. Happily in the 68-page book we have some great advertisers. Some have not been with us before and we hope that will continue.”

When asked about categories that perform well, Middap pointed to automotive and homeware. “We are also finding travel is a strong sector at the moment. We get some retail advertising too.”

Regular special editions annually are domestic travel early in the year, a list of John Lethlean’s top 50 restaurants in August and James Halliday’s top 100 wines in November. “We are reluctant to do too many special issues where we devote the whole magazine to a specific topic. If it is an area that is not of special interest to some readers you can risk turning them off. We are very careful to make sure the three do align with a great number of our readers.”

Keeping a stable of writers

Are the days gone when a magazine can boast a stable of writers who get more time to craft their editorial for the readers?

Middap: “Happily for us those days haven’t gone. I know our competitors [Good Weekend] have lost their stable of writers. I actually don’t know how you edit a magazine if you don’t have staff writers. You need to be able to rely on them to give you the pieces you want when you need them.

“We still have Walkley Award-winning writers Richard Guilliatt, Kate Legge and Trent Dalton, and Megan Lehmann has joined the magazine recently. We also have Cameron Stewart who does quite a lot plus we get contributions from other great writers from The Australian.”

Leadership at The Australian

Although the award-winning Michelle Gunn remains editor of The Weekend Australian, Middap was asked if the arrival of Paul Whittaker as editor-in-chief had changed the magazine.

“For me I work as I always have. Michelle and I have a great working relationship and I keep her in touch with what we are doing so there are no clashes with a story we are working on and one the paper is working on. I also keep in touch with Paul Whittaker to let him know what we are doing. I have known him for a long time and we go way back and understand each other very well.”