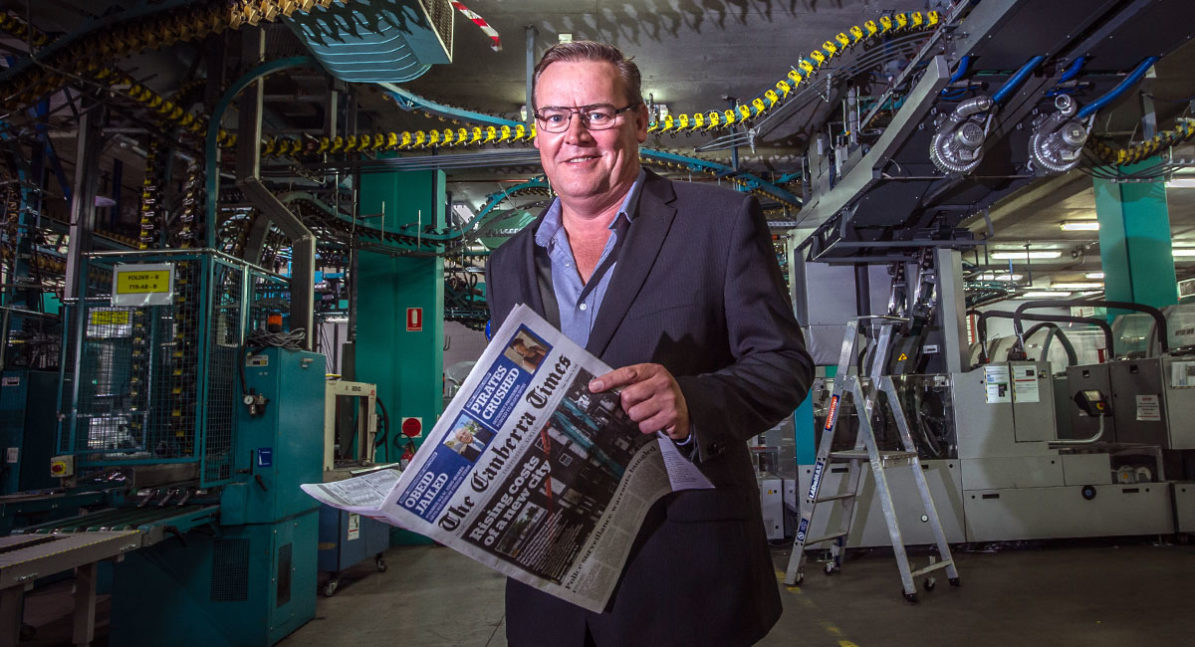 The Canberra Times editor on politics, readership and the compact format

In the second half of last year, Fairfax Media’s last remaining broadsheet newspaper The Canberra Times changed its format to compact. It also farewelled over 10 full-time staffers.

“The change from broadsheet to compact and the organisational restructure that we went through last year were two different things,” The Canberra Times editor Grant Newton told Mediaweek. “During that restructure, we did go through some voluntary redundancies and we had to reduce staff. But at the end of the day, we’ve got a great team of people who are getting the job done.”

All this happened about six months after Newton was formally announced as the new editor of the title in November 2015. Prior to that he had been the acting editor for most of that year.

Apart from the internal changes, 2016 was a hectic year for The Canberra Times, Newton said. Two of the biggest three news stories for the paper took place in its own backyard: the ACT election and the federal election.

“This is the picture of Canberra,” he said proudly. “What we are is a newspaper for this city. We reflect the issues that are important to Canberra. We are located in the political capital of the nation so our readers do have a healthy appetite for federal politics. A lot of them are public servants, so the decisions made by the government in Canberra have a direct and large impact on their lives. So the public service sector is a huge part of our package.”

The brand has a readership of 891,000, much of it coming from its digital offering. Its website, canberratimes.com.au, has a unique audience of 751,000. In February 2017, the site had more than 25m page views, Newton said. He said the news events mentioned above were good news for the website traffic last year, allowing the website to raise its profile in Fairfax’s portfolio of digital properties.

“It’s about delivering to readers the news when they want it and on the platform that choose to consume it on,” he said. “We’ve been very focused on doing that in the past couple of years.”

“I don’t want the print readership to decline,” Newton said. “But print readership is obviously one measure. Our overall readership figure is higher than it ever has been in the history of the paper. I am pleased with that.

“Our business models will evolve with the time and demands of our audience as Mr Hywood [Greg Hywood, Fairfax Media CEO] has suggested. Who knows how people will be consuming media in five years’ time? If you asked me the question five years ago, I couldn’t paint the picture that we have today. The talk about the ultimate demise of print is premature.”

The overall readership breakdown for The Canberra Times from Fairfax indicates that 55% of the readers are males and 45% are females. Forty percent of the brand’s readers are aged between 45 and 64.

The Canberra Times is the only daily newspaper in the city, so it isn’t faced with much competition in that respect. However, it’s only about a five hours’ drive down from Sydney, which is still a very competitive market in print. Asked if this impacts the newspaper in any way, Newton said: “Canberra has a big population of expats, so there are a lot of people in the city who’ve moved from Sydney and Melbourne for work reasons. They take a keen interest in issues that affect those cities. Where we fit really well is that we focus on the issues affecting Canberra more than any other media organisation.”

“It’s changed dramatically,” he noted. “People want to consume their news now, and we have to deliver it to them on their phone as it’s happening. That’s the real challenge for newsrooms today that didn’t exist back in 2001 when smartphones were still a long way off.”