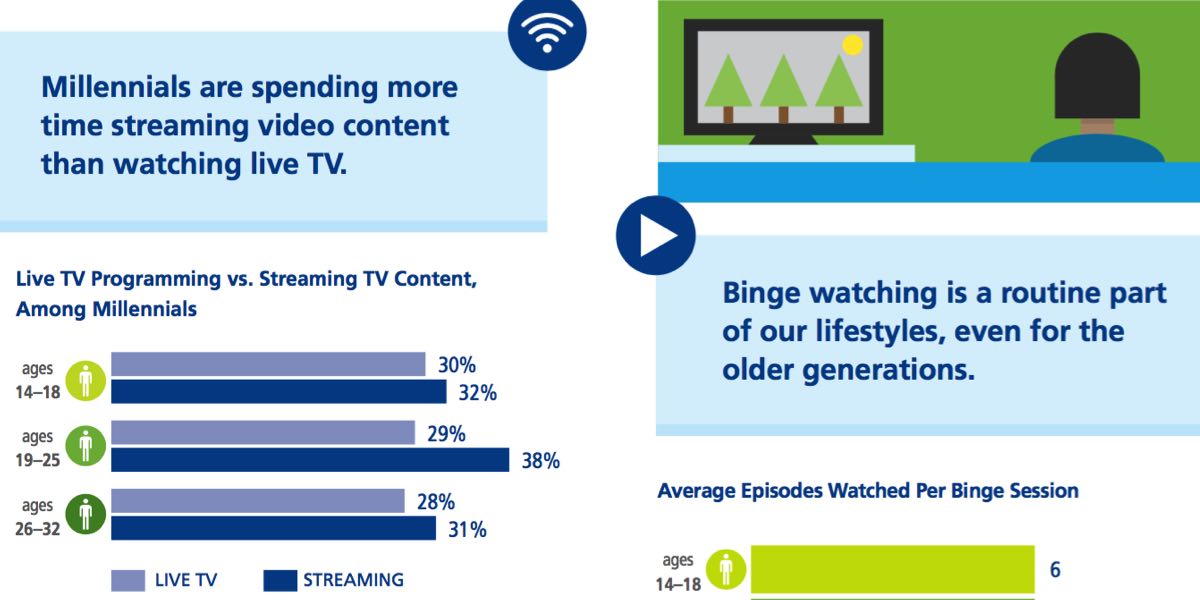 • Nearly half of Americans subscribe to streaming media services, highest in survey history
• Influence of online reviews and social media eclipsing TV advertising for many millennials
• Two-thirds of millennials value interactions with friends on social media as much as time spent in-person

Has America become a marathon nation when it comes to video content consumption? Indications point to “yes.” Seventy percent of US consumers now binge watch an average of five episodes at a time, and almost one-third (31 percent) binge on a weekly basis according to Deloitte’s 10th Digital Democracy Survey. In addition to binge watching, nearly half (or 46 percent) of Americans now subscribe to streaming video services, with millennials aged 14-25 spending more time streaming video content than watching live television.

Additional binge watching and streaming media findings from the survey include:
• More than half of all consumers and three-quarters of millennials watch movies and TV shows via streaming on at least a monthly basis
• Millennials aged 26-32 who currently pay for streaming video have an average of three subscriptions
• Millennials aged 14-25 value their streaming video subscriptions more than pay TV subscriptions
• Over one-third of baby boomers aged 50-68 (35 percent) who binge watch TV do so once a week, and average four episodes per sitting
• Over half (53 percent) of US consumers who binge watch choose television dramas
• The percentage of streaming subscribers who ranked the service among their top three most valued subscriptions has tripled in the last three years (61 percent today, up from 17 percent in 2012)

“The proliferation of online content shows no signs of slowing down and the consumer appetite to consume content is equally voracious,” said Gerald Belson, vice chairman and US Media and Entertainment Sector leader, Deloitte Consulting LLP. “The survey data indicates that consumers are more willing than ever to invest in services to watch whenever, wherever, and on whatever device they choose.”

Highlighting Americans’ preferences for entertainment devices, Deloitte’s “Digital Democracy Survey” examines emerging behaviours across generations, specifically millennials, who are setting new benchmarks for how much media content is consumed and paving the way for older generations to follow. The survey also looks at the value consumers place on products and services; as well as attitudes and behaviours towards advertising and social networks, and mobile technologies. It includes influencers of consumer buying decisions, and how consumers are using their devices. Among the findings are:

“The on-the-go, always-connected consumer is driving cultural changes in content consumption that fundamentally impact how companies connect with and engage consumers,” added Kevin Westcott, principal and US Media and Entertainment Consulting leader, Deloitte Consulting LLP. “These behavioral changes combined with the shift towards mobile-based consumer experiences are disrupting traditional business models—while at the same time paving the way for newer opportunities for technology, media, and entertainment companies to adapt and evolve.”

The “Digital Democracy Survey” was fielded by an independent research firm from Nov. 5-19, 2015 and employed an online methodology among 2,205 US consumers. All data is weighted back to the most recent US census to give a representative view of what consumers are doing.

For more information on the US edition of Deloitte’s “Digital Democracy Survey,” visit www.deloitte.com/us/tmttrends.
Connect with us on Twitter: @DeloitteTMT and #tmttrends
Source: Deloitte